This has been top of my list of places to visit since I arrived in the UK. I’ve been dreaming of this trip for months. And when my friend suggested we go for my birthday and for the Christmas Markets, I honestly cried. This would be the best birthday of my adult life!

So with this is mind I set off to Copenhagen!!!

The trip over was awful and I will NEVER fly with Easyjet again. But that bitching will be saved from your eyes, cos I’m that kind: P

The first day started with a trip on the train to the little mermaid statue. Mind you the trains themselves are amazing, and way bigger than my house. It felt like I was in the future. The trains had TV’s and plush chairs, London tubes could really take some pointers from them. So I arrived at the statue of the Little Mermaid, which has been the centre of the Disney movie, and some other dude who wrote the actual story, I forget his name.

We didn’t have a plan till lunch time, so spent some time wandering the streets. Copenhagen is beautiful; it has everything I’d ever want in a town. Every second shop is a health food, or organic cafe. Aimlessly walking lead us right into the palace square, where at that exact moment the changing of the guards was beginning. Talk about timing.

I’ve never seen a changing of the guards, it’s all quite scripted and almost like a dance. It was quite interesting to watch. Near where the guards marched, there is a huge beautiful church. It’s a massive dome, and has murals, and stained glass all around the walls. I imagine the sounds on a Sunday here, when there a tons of people singing, would be wonderful due to the shape of the church.

Next stop LUNCH!!! And mannn have I been waiting for this for a loooong time. Little did I know that 42Raw and Paleo are actually in the same street and side by side. AMAZING!! So 42Raw was first on the tasting menu.

I couldn’t decide what to have, so settled on a tasting plate: raw sandwich, raw lasagne and raw curry. I’m a fan of the raw food movement, only as a treat, or a change to the usual eating plan I have, and everything on this plate was delicious. Even my bacon loving, chicken eating friend liked the raw lasagne. I finished the meal off with a coconut and ginger brownie, and a vanilla cookie. The cookie was my favourite part. I honestly could have died happy after that cookie.

But there was more to discover…….. The Tivoli Gardens are a huge draw card to Copenhagen, as they are only opened four times a year. And being a month till Christmas, they had opened a week or two before our trip, and were stocked with Christmassy stuff.

The temperature dropped, and man was I cold. And for everyone who knows me, I whine, and whinge A LOT! I’m like a little kid. No attention span, always need a drink or to pee, or I’m cold, or I’m hot, or I’m tired. Haha can’t win really. So when I went to the Tivoli Gardens, it was night time and the temperature was around 1 degree. Yep I was dying. Pretty sure winter will kill me!

But as soon as I saw the lights, and all the prettiness of the gardens, my freezing disappeared. It was soo fun and Christmassy, with tons of lights and decorations, and sweet sweet smells of sugared nuts, and waffles. I guess this is what you expect for a cold Christmas.

There was soo much to see and look at, my eyes and brain were in over drive! After a few hours, the excitement wore off, and I was back to being cold! But with a quick costume change I was off to a Ruby for birth day cocktails.

Day 2 started with a late breakfast and then more wandering and stumbling upon great parts of the city. I saw Christmas markets, with a super jolly Santa, I had juices, and coffees at nice little cafes. And then it was time for Paleo: D

It’s the best feeling going into a cafe and knowing I can order anything on the menu and be able to eat it without dying or feeling awful. Paleo was everything I could imagine. I had a salmon wrap, which was made out of egg, and in the wrap was orange and pomegranate. It was simply divine. And what is lunch without dessert, coconut muffin and brownie with coconut butter and flakes. Too much YUM!!!

With full bellies, we set off for more sightseeing. I have this ability to find organic food places no matter where I go. It’s like I am drawn to them, and no surprise I stumbled upon two food halls, which housed soo many different kinds of foods and oils, and drinks. EVERYTHING! 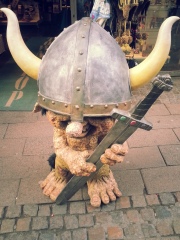 After a rice milk gelato and peppermint tea, it was off to prep for dinner. On the menu were fishies!!!!

When I arrived at Fiskebaren we were seated at a huge bar with a fish tank in the middle. So we were literally eating dinner with the fishies. The restaurant was a little more up market, and nothing seemed too difficult for them. They were soo helpful with all my allergies and issues; that they specifically made me a dessert with ingredients I could eat, which the chef bought out himself. The fish was super fresh and so delicious. The whole experience was fun, and really ended our nights in Copenhagen amazingly.

With our trip drawing to an end, we decided to spend our last hours in Copenhagen at the zoo!!! It was minus a million degrees, but that didn’t stop our excitedness. One thing I don’t understand is how they can take a zebra from Africa and dump it in a zoo in Copenhagen where the temps are super cold, and the zebra just adapt and act like it’s the Bahamas. I’m freezing my a$$ off and I have a million layers of clothes on.

The zoo was a ton of fun, and you could really get quite close to some of the animals. It really ended the trip off well.

The flight home was a disaster, and again will never fly with Easyjet again. But Copenhagen is now my new favourite place on earth.

Peace out for now……

This site uses Akismet to reduce spam. Learn how your comment data is processed.

I'm an Aussie who moved to the bright lights of London for one year.... many years later I'm still here having fallen in love with not only the city but with my very own Saffa. I'm still figuring out how to navigate life, but I'm enjoying every moment. I love food, fitness and bargains, hah, So join me on this wild ride we call life... View all posts by Ra_k_